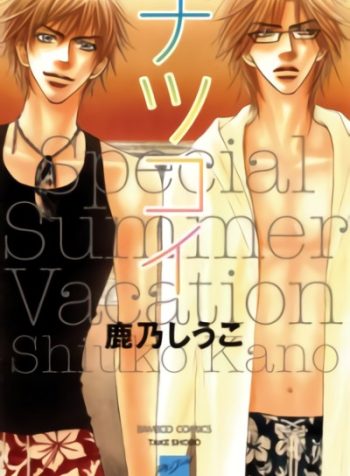 Special Summer Vacation Average 4 / 5 out of 1

1) Natsu Koi Beach cafe worker Ide Mitsu was dumping a female pick-up when they heard a loud face slap. They looked over a beach rock and saw it was his seemingly perfect classmate, Shirohara Takashi, who had his face slapped by a woman. 2) Fuyu Koi Ide Mitsu struggles to define his three-month relationship with Shinohara Takashi who seems to be holding himself distant. After a night out, Ide soon discovers why… 3) Room Mate The young student wakes up in the middle of the night and finds himself on top of his senior from school… Prequel of Heaven (chapter 4 of Mayou Otoko) 4) Parasite versus Honey All the students and teachers are getting antsy over a suspicious character that is hanging around school. Sequel of Who Made Him Such a Man? (chapter 1 of Konna Otoko ni Dare ga Shita) 5) Mujina Hiromichi spends many a nights outside his future brother-in-law??™s place, all in the name of gathering signs of possible infidelity. But he who stalks, is stalked in return… 6) Bull Futatabi 2001 A boy brings his childhood friend to his grandmother’s place for a quick getaway. Sequel to Bull to Arukeba… (chapter 1-4). 7) Amamiya-kun ~ 3 Years After It has been 3 years since his best friend graduated and left the room. (short story on the ghost from chapter 3)

CEO Above, Me Below

Tales of Demons and Gods

Facing Off Against the Scumbag Top

You don't have anything in histories